I think I finally understand exactly what a confidence interval is. This post explains my understanding.

Alice is a researcher, and wants to know what fraction of people are left-handed. Since no one has studied this before, she can’t just go to Wikipedia and look up the answer. Instead she surveys some people chosen uniformly at random from Earth, analyzes the results with the Clopper-Pearson method (as one does), and announces:

What exactly does this mean?

The obvious answer would be that there’s a 95% chance that the proportion of lefties is between 6% and 13%. After all, it is called a 95% confidence interval, so you should be 95% confident that the true value lies inside the interval. And more than half of psychology researchers in the Netherlands agree with this statement.

Nevertheless, this is wrong. There is not a 95% chance that the fraction of lefties is between 6% and 13%.

There is a kind of interval for which that would be true. It’s called a credible interval. It’s a different thing, that’s calculated a different way.

Let me explain the difference between confidence intervals and credible intervals.

Say you are curious about some value X; in our example, the percentage of people who are left handed. Then you can compute either a confidence interval, or a credible interval.

A 95% confidence interval has a lower and upper bound; call them L and U. 95% of the time, X will lie between L and U:

(Yes, I realize this appears to contradict what I said earlier. It does not. Keep reading.)

On the other hand, a 95% credible interval has a lower and upper bound; call them L and U. 95% of the time, X will lie between L and U:

Obviously, this is completely different.

Well, glad we cleared that up. Thanks for reading!

Oh, perhaps you were confused by the fact that both the English description and the mathematical formulas completely hid the distinction between the two types of intervals.

In the Frequentist interpretation:

On the other hand, in the Bayesian interpretation:

From now on, I’ll put a ? after random variables in formulas, to distinguish them from constants. So in a (Frequentist) confidence interval:

On the other hand, in a (Bayesian) credible interval:

In other words, there’s a 95% chance the random true value lies inside the credible interval you calculated after surveying a single set of people.

The consequences of this aren’t immediately clear, though. It isn’t even obvious whether this difference really matters. Let’s explore!

At the beginning of this post, I said that there is not a 95% chance that the fraction of lefties is between 6% and 13%. But I also said just a second ago that, in a 95% confidence interval:

In the Frequentist interpretation, L and U are random variables. They were randomized when Alice picked which people to survey (uniformly at random). If her random selection picked different people, then she might have seen more or fewer lefties, giving different values for L and U.

However, the specific values of L=6% and U=13% are clearly not random. They were random until Alice selected them, but now we know exactly what they are. So

Here’s a more extreme example that may guide your intuition. Instead of getting L and U from a confidence interval calculation, say we get them (literally) from the roll of a die. The die roll will be an integer from 1 to 6, and we’ll define L to be one less than the roll and R to be one more. (For example, if you roll a 2, then L? = 1 and R? = 3.) And say that, instead of being an unknown constant, X is a known constant with the value 2.5. Then, what is this probability?

I realize that this “extreme” example may not be very convincing for what is happening with the confidence interval. The problem is that X in this example is known, but you only realistically compute a confidence interval when X is unknown.

Honestly, I think the Frequentist interpretation is counter-intuitive: it interprets L and U as random variables, even though we know their values (6% and 13%), and X as a constant, even though we have no idea what value it has.

Okay, but I still want to know if X is in the interval

The reason that Alice did an experiment was because she wants to know what X is. So it’s pretty unsatisfying that, in the Frequentist interpretation, you can’t make any statements about how likely it is that X is between 6% and 13%”. You can only make the long and awkward and not particularly helpful statement that “the interval 6%-13% was generated by a random process which produces intervals that contain the true proportion of lefties 95% of the time”.

So when someone does speculate on whether a particular confidence interval contains X or not, they have left the realm of mathematics and are making claims outside of probability theory, using good old-fashioned heuristics and guesswork. It’s fine to do this, just realize that you are no longer doing math.

The reason there can be several different ways to compute an interval with this property, is that it’s a weak property. It just tells you that on average, 95% of intervals will contain the true value. But some intervals may be more plausible than others.

I’ll give an extreme, though technically valid, example.

Here’s a statistical test that produces a perfectly valid confidence interval, for estimating a parameter whose value is known to lie between 0% and 100% (e.g. the proportion of people who are left handed):

The issue with this is that, if the true value turns out to be much larger than the upper bound of the interval, I would like to be able to say “Wow, what a high value! I am surprised!”. But instead I only get to say “Wow, what a value! Either that is higher than the data suggested, or we got unlucky and the confidence interval was misleadingly tight for no particular reason!”.

(I read a great article by an actual statistician that talked about a statistical test that—properly employed—would sometimes return a confidence interval that was partially negative, for a value that was by definition positive. The point was, this is completely legit! If you feel it isn’t, you don’t yet grok the confidence interval property. I’ll link to the article here if I ever find it again.)

Let’s contrast this to the Bayesian approach. Remember, in the Bayesian interpretation, a credible interval has the property:

X, the proportion of people who are left handed, is a random variable. What is its distribution?

Actually, say that Alice hasn’t even surveyed anyone yet. At this point in time, X is still a random variable, so it must be taken from some distribution. But which one? We have no idea how many people are left handed; that’s the whole reason Alice is doing an experiment in the first place.

Nevertheless, in the Bayesian interpretation, X is random, and thus we must assume some distribution for it prior to gathering data. This is called its prior distribution.

Let’s roll with this, and compute a credible interval. Since we have to pick a prior, let’s assume that X’s starting distribution is uniform. (Remember that X is the fraction of all people who are left handed.) So our starting distribution says that it’s equally likely for X to have any particular value: 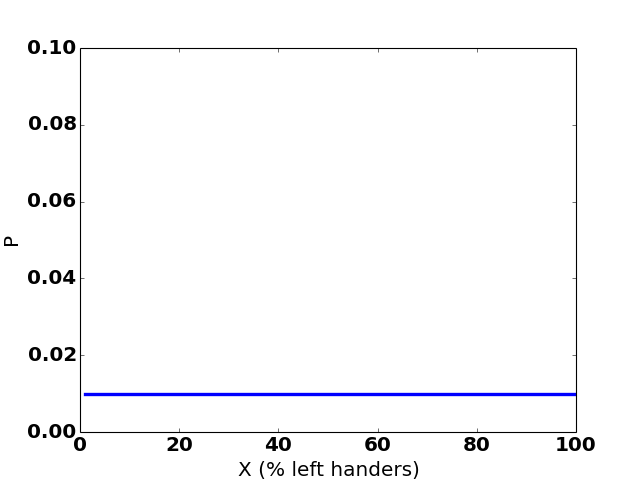 (Yes, I know the value of X is almost certainly not a perfect integer. Let’s simplify and say it is. It doesn’t change the conclusion, I promise. Oh, and I’m also pretending it can’t be 0%. Shhh.)

That’s the probability distribution of X, before we’ve gathered any data. As soon as we start gathering data, it changes.

So we pick a person uniformly at random from Earth, and ask them whether they’re left-handed. They say (in Bengali) that they’re not; they’re right-handed. We can now use some basic probability theory to update X’s distribution to account for this information.

Let A be short for “the person we randomly picked was not left handed”. Then the new distribution should be P(X|A), meaning “the probability that X has a particular value, given our observation of a non-left-handed person”. We can compute it like this:

(The law of probability used in the first step is called Bayes rule.)

So our updated distribution for X—which is called a posterior distribution—is 0.02 (1 - X): 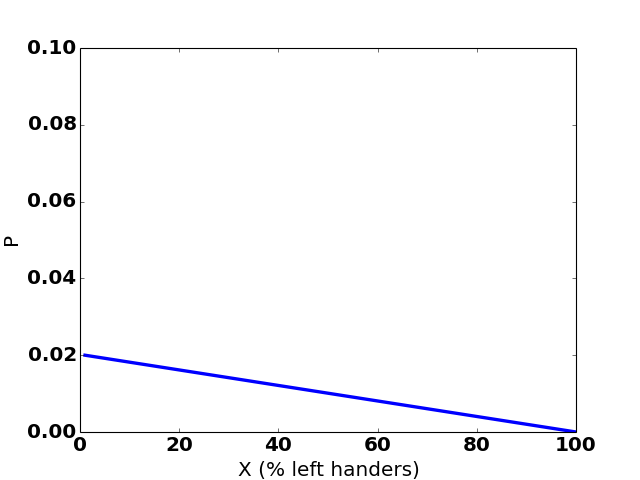 The hypothesis that “literally everyone is left-handed” has been eliminated by the observation of a right-handed person.

If we next see a left-handed person, our distribution for X updates to: 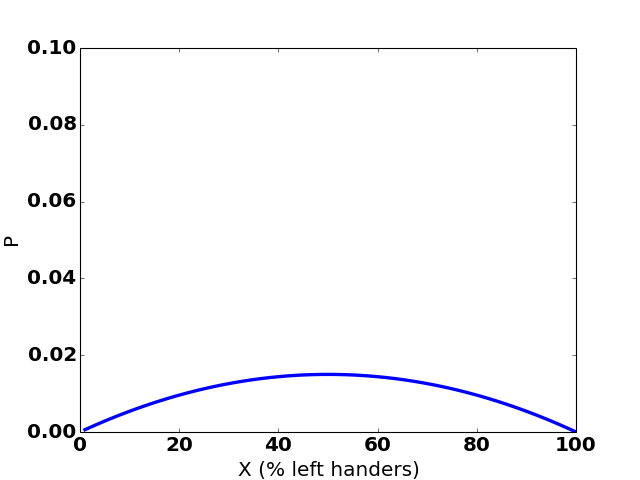 Remember, at this point we’ve seen one leftie and one rightie. So it makes sense that the distribution is symmetric.

Here’s how the graph changes over 35 hypothetical observations:

(The sudden jumps to the right are observations of a left-handed person.)

Say we keep going, and get to 21 lefties out of 243 interviewees (these are the numbers I assumed for Alice’s confidence interval at the beginning of the post). Then our graph will look like this: 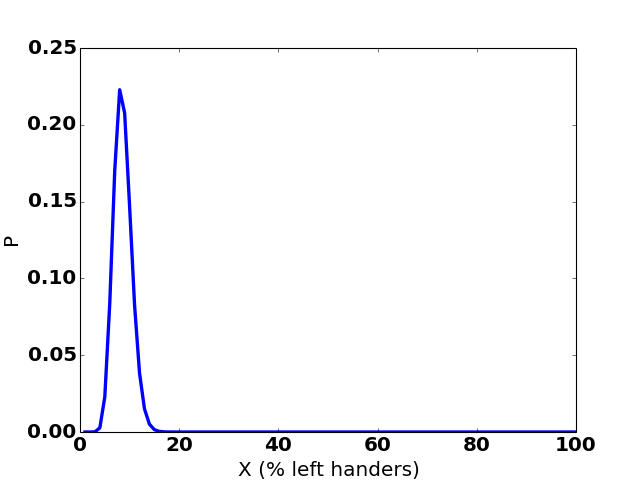 So if you accept a uniform prior then there’s a 95% chance that the proportion of the population that is left-handed is between 5.74% and 12.86%.

How could you follow in Alice’s footsteps, to compute a confidence interval?

Wikipedia lists five methods for computing a confidence interval for a binomial distribution (i.e., one with a yes/no answer, like “is this person left-handed?”). They are:

The Normal, Wilson, and Agresti-Coull intervals can be “permissive”, meaning that when you ask for a 95% confidence interval, the probability that the interval contains the true value might be less than 95%. (Personally, I would have called this “wrong”, but “permissive” seems to be the word of art.) So let’s ignore those.

The Clopper-Pearson interval is what I had Alice use. If you ask for a 95% interval, there’s always at least a 95% chance that the interval contains the true value. Though it can be a bit conservative. You can see that in this post: Alice’s confidence interval is a bit wider than the Bayesian credible interval.

The final option is Jeffry’s interval. It is a Baysian credible interval, that also obeys the rules for a confidence interval. As a credible interval, it’s like what we calculated above, except that instead of starting with a uniform distribution, it starts with a beta distribution with parameters (1/2, 1/2). That distribution looks link this, which seems a little odd to me because it says it’s impossible that exactly half of all people might be left-handed.

As a confidence interval, Jeffry’s interval has the bonus property that it’s equally likely for the true value to lie to either side of the interval. According to Wikipedia, this is in contrast to the Wilson interval, which is centered too close to X = 1/2.

There’s a lesson here: while the probability that the true value lies outside a randomly generated 95% confidence interval is 5%, the chance it lies above the interval need not be 2.5%.

I think the main takeaways are: